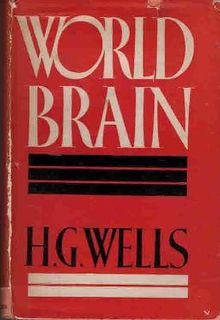 Wright's piece also covers how Otlet and his partner Henri La Fontaine, a peace activist and future Nobel Peace Prize Winner, met novelist and essayist H. G. Wells in 1937 at a conference organized by Otlet. Wells was a socialist who believed that an information age would lead to social equality. One year later, Wells began writing a collection of essays about the World Brain: an encyclopedia that could help "world citizens" achieve peace and equality with access to the world's information.

In the end, the internet we know was created by the largest military in the world and was then built and wired to advance, and repel, constant sales pitches and Nigerian princes with unbelievable offers.  More importantly, it has become the place for visionaries, builders of social equality and world peace, and the people who will be 'discovered' 100 years later for predicting and inventing the future.  But whatever this electric telescope is now, it most certainly isn't done yet.  There's a lot of peace and social equality yet to build.  Which, to be honest, is the best part of my job.